A History of Elections in the Cayman Islands

[Researched at the National Archives]

According to our records the first formal type of elected Government was first introduced in December 1831. However, prior to this the Islands were administered by a number of Magistrates and Senior Magistrates, and some times even by a Custos, appointed by the Governor of Jamaica. This system of Government worked well while the population remained relatively small but as the population increased a number of problems were experienced because of weaknesses in the system. [See âFounded upon the Seasâ Chap. 5 âThe Beginnings of Self-Governmentâ By M.Craton] The first Magistrates ruled with some references to Jamaican Law. In 1802, as Edward Corbet had noted  in his Report,âThe Magistrates are understood to have the same power as those in this island [Jamaica], but when any new measure is to be adopted it is generally submitted by them to the consideration  of the population at large.â This seemed to have been a very democratic manner of dealing with affairs of state, but not everyone was pleased as this led to some confusion and conflict.

By at least 1823, the Chief Magistrate, James Coe Sr., and the other âMagistrates and principal inhabitantsâ of Grand Cayman apparently felt they needed a more formal system of lawmaking and set of laws. Accordingly, they asked for and got commissions for several more Magistrates from Governor Lord Manchester.

Then on 13 December 1823, the Magistrates and âprincipal inhabitantsâ held a meeting at William Edenâs residence at Pedro St. James. Their first decision was to lease the Pedro property from William Eden for Â£5. 6s. 8d a year. It would be used as an animal pound, court-house, and jail, with a daily payment of 2s.11d authorized whenever there was a prisoner.

Other laws were passed at this time, which dealt with roaming livestock, duties on dry goods, provisions, liquor, or any kind of merchandize sold by any non-inhabitant. Another law, which prohibited the sale of liquors, wines, by any slave, was also passed at this time.

Pedro St. James continued to be the seat of Government, with regular meeting held at this location. On 5th December 1831 a meeting was held at Pedro St. James to form a proper legislative assembly with representatives and Magistrates from each district appointed.-  forming as it were two houses in imitation of the Council and Assembly of Jamaica.

On 10th December 1831, 2 representatives of each were âelectedâ for the districts of West Bay, George Town, South West Sound, Prospect, and Bodden Town the method of election is not known. These ten representatives later referred to as the âVestryâ assembled for the first time on 31st December 1831 in George Town, and met again on 2nd January 1832. The eight Magistrates met at the same time but in a different room carefully preserving the classic British form of a bicameral legislature. No law was âdeemed validâ until it had received the assent of both houses.

The names of the Magistrates & Representatives at the 1832 meeting were:

The following is a summary of subsequent elections results.

At another meeting on 16th Septemebr 1909  held at the Commissionerâs Residence in George Town,.the following persons attended:

Justices of the Peace

These two meetings were held only a few weeks apart, and the records show that some member were present at both meetings while some were absent for one. The names in attendance show names that do not appear before this [Please note the name of the East End Vestryman below]. We do not know when these members were elected. At yet another meeting the following year the records show a different group of Vestrymen representing the different districts, although some of the same persons remain. The list of persons attending this meeting are:

Justices of the Peace

During a meeting in 1911 George Town Vestryman, C. J. H. Goring quoted the writer Wm. Shakespeare. The Commissioner, not being a Shakespeare scholar did not understand the meaning of what was said, recessed the house to do research on the particular passage of Shakespeare before reconvening the sitting again later.

In 1922 an Election was held but the records of the results are not complete. These to be added after later research.

The results of the 1932 Elections are more complete.  Records show that the Elections took place on different dates of the same month of August, in different Districts. The results were as follows:

At this point Mr. H. M. Coe wrote a strong letter to the Commissioner expressing his feelings that it seemed impossible to have three elections with two candidates tied three times. He suggested the possibility of tampering, and called for an investigation.

The new By-Election was held on the 19th August, this time with definitive results. The results of the whole Island Elections are listed below for easy reference.

Also during the 1948 Elections a letter was received by the Commissioner from a group of women in George Town, expressing their right to vote and run for Election. Up until this time, women did not vote though there seemed to have been no law prohibiting women from voting. We find no reply to this letter but the matter was raised again in 1956 and finally was settled in 1959. For more details of this womenâs campaign please see  âFounded upon the Seasâ,  History of the Cayman Islands Chap. 14 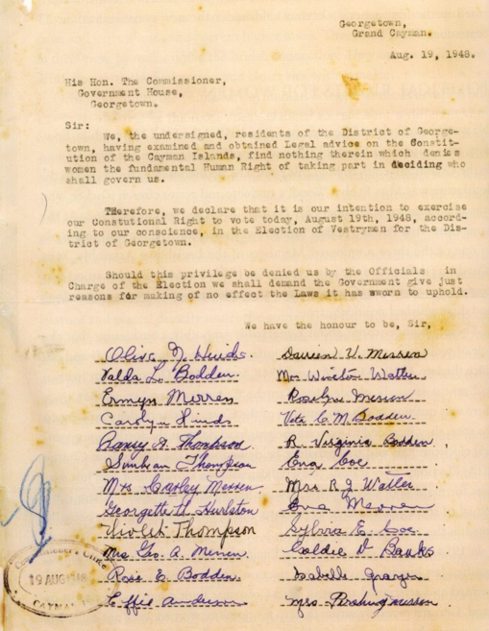 This letter started a controversy, which lasted until 1959 when women finally got the right to vote and run for office. [See complete history in âFounded Upon the Seasâ 1956 Elections

In 1959 the Cayman Islands were granted their first Constitution and Universal Sufferage, the Assembly changed from the Assembly of Vestry to the Legislative Assembly and twelve members were elected, there were also three Official Members, and three Nominated Members.

Excerpt from speech made by His Excellency the Governor on 2nd October ,1959 from the Secretary of State for the Colonies on behalf of Her Majestyâs Government in the United Kingdom.

â â¦ The first meeting of the Legislative Assembly for the Cayman Islands under the new Constitution provided for by Order made by Her Majesty the Queen in Council on the 13th of May, 1959 â¦ You have today a Legislative Assembly to which twelve members have been elected for the first time on the basis of universal adult sufferage.â

- Address by His Excellency the Governor to Legislative Assembly for the Cayman Islands.

The new Legislative Assembly was comprised of the following:

The 1959 Elections was a turning point for the Elections Process in the Cayman Islands as the women finally had a voice and were able to run for Elections, and hold Office. This move came at a pivotal time in the Islands development, as a large percentage of the men were away at sea and were not available to fill many key posts.

The next change to the Constitution came in 1972 as a result of select committees appointed by the Legislative assembly in 1966, 67, and 69 but nothing was achieved until 1972.

In June 1970 the Earl of Oxford and Asquith was appointed by the Commonwealth Office to examine the situation and make recommendations. He arrived in January the next year and met with the people in the Cayman Islands. It was soon realized that the people wanted very little changes and certainly no significant constitutional  advancements. In the end the new constitution came into force on 22nd August, 1972.It made some significant changes but stopped short of full self government. One of the changes introduced a âMemberâ and âPortfolioâ system of governing for the first time instead of a full Ministerial Government. The 1972 Constitution established the qualifications for being a âCaymanianâ and the criteria for voting and running for Political Office.